The Future of Pipe Rehabilitation is Pipe Bursting 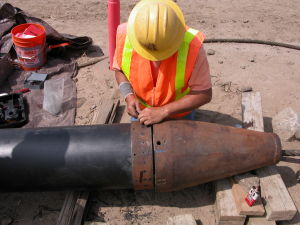 Many advances in technology have affected way the world is doing things. From controlling electronic devices in the home remotely to paying for products and services with the swipe of android phone, there are so many different ways to save time and money. These advances are not restricted to one or more areas in the business world since every industry is impacted. Some of the most needed changes are eliminating the older technology with the latest advances. One in specific involves the use of pipe bursting technology because it is changing pipeline practices throughout the world. Fortunately, the future pipe of rehabilitation, as it relates to pipe bursting, is very promising and bright. This is because organizations like the International Pipe Bursting Association have taken a dominate role in spreading this technology throughout North America and other areas.

With this in mind, it is important to understand what pipe bursting is, review this technologies history and its successes and check out an overview of what’s coming up next in pipe rehabilitation as it relates to the future of pipe bursting in an international environment.

What is Pipe Bursting?

Pipe bursting can be described in a number of different ways. In many cases, professionals in the industry will refer to this type of process as a trenchless replacement method that is being used in numerous places around the globe. When specialists in the industry use this technique, they usually start by breaking the existing pipe using a brittle fracture or splitting procedure. This step is accomplished by applying force via an internal mechanical bursting tool. At the same time, the new pipe is being installed to replace the existing pipe. Simply said, the old piping system that has been in existence for many years is being replaced with the latest and most updated quality technology.

It is important note that Pipe Bursting dates back to the 1970s, and was first developed in the UK by British Gas and D. J. Ryan and Sons. So, it is a well-established and proven method of replacing piping systems internationally. As this technology spread, this method was patented by the UK in 1981 and the U.S. in 1986. Since those times, pipe bursting has grown dramatically in these areas as one of the standards for replacing pipes.

The Future of Pipe Rehabilitation is Pipe Bursting

Today, the future of pipe bursting is continuing to break through large markets, especially in North America. This is because there is a strategic plan that has been developed in collaboration with the most influential experts in the industry. Their job is to promote pipe bursting technology throughout gas, water, sewer as well as other underground utility markets.

Further, according to the standards being developed in the International Pipe Bursting Association Guideline for Pipe Bursting, the primary mission is to advance its acceptance in the industry as the trenchless technology of choice. In general, this means whenever a pipelines need to be replaced or repaired throughout areas in North America, pipe bursting technology should be used.

When new technology enters into any industry, major changes can occur. Some advances are more notable and evolutionary than others. In the case of pipe bursting rehabilitation as it relates to pipe bursting, this technology has not really reached the surface in areas like North America. So, the plans going forward by the International Pipe Bursting Association is to make this method the standard and the technology of choice. With these plans, people in the industry, can expect to see it grow greatly throughout, gas, water, sewer along with underground utility markets.